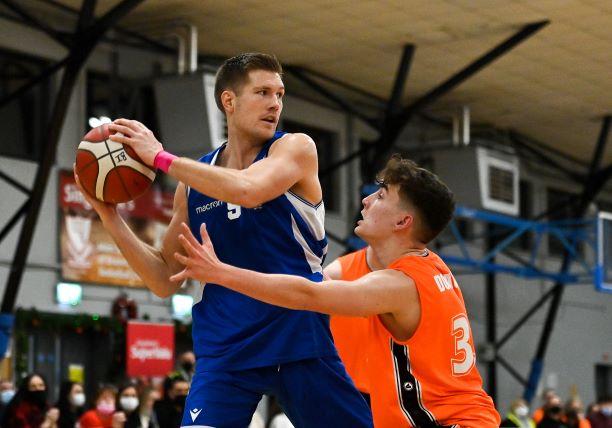 UCC Demons beat EJ Sligo All-Stars 73 -64. Tala Fam Thiam was the top scorer with 31 points. A blistering start for demons who scored 9 points with no reply. Demon added the pressure from the defensive ends with some crafty plays from Jack O’Leary who opened up the basket and the foul for Toby Chistensen. Despite Sligo's struggle to find their shooting touch they created some lovely baskets for Zack Powell.

Ireland Senior captain Kyle Hosford provided some on-court leadership supporting his team during the second quarter. Jack O’Leary continued to impress on the defensive end collecting a rebound leaving him alone in the open court until Zack Powell made a huge recovery to leap into the air and block the layup bringing the Sligo supporters to their feet.

EJ Sligo All-stars started to settle into the game as baskets from Zack Powell and Oisin O’Reilly cut the deficit to 6 points midway through the second quarter. Tala Fam Thiam began to establish himself with some huge baskets for UCC Demons he battled with EJ Sligo All-Star’s Keith Jordan Jr above the rim.

Daniel O’Mahony, @Bluedemons_BC head coach, spoke with us after his team secured their spot in the President’s Cup final 🎙🏀 pic.twitter.com/FrKkYfwa1Z

Kyle Hosford continued to impress and display his vision and playmaking as an extra pass to Tala Fam Thiam resulted in a well-deserved layup. The home crowd made their presence felt trying to give Demons any advantage they could. EJ Sligo All-stars struggled to find their shooting touch and finish the half, UCC Demons 38 EJ Sligo All-Stars 24.

The third water quarter with an opening score from Oisin O’Reilly and a steal from Keith Jordan Jr game. Oisin O’Reilly continued to utilise his spin and create open shots for his EJ Sligo All-Stars teammates as Jamie Hayes executed a fine reverse layup.

Tala Fam Thiam stood out as he picked up rebounds and pushed the ball for the cork side. The UCC Demons supporter's calls for defence were intended to increase the defensive pressure and contributed to the electric atmosphere in the Parochial. David Lehane contributed to his team’s lead as he hit a fadeaway mid-range jumper followed by an athletic finish from Tala Fam Thiam causing the crowd to rise to their feet.

Keith Jordan Jr crashed the boards for Sligo earning him two free throws at the beginning of the quarter. UCC Demons guard Jack O’Leary left the game following an ankle injury which may put him in jeopardy for the local rivalry that is the U20 National Cup tomorrow vs Ballincollig.

Toby Christensen picked up his fourth personal foul with over six minutes left in the final quarter adding extra pressure to the home side. Keith Jordan Jr did his best to inspire his team with two athletic interceptions on the defensive end. However, Tala Fam Thiam continued to storm through the EJ Sligo All-Stars increasing their lead to eleven points. David Lehane’s effort and hustle were welcomed by head coach Danny O’Mahony as David slid backward out of bounds to guarantee possession for his team. Lehane continued his effort grabbing rebounds and cutting aggressively to the basket drawing fouls willing his side to win.

Zack Powell’s free throws cut the deficit to 4 with 3 minutes left in the thrilling semi-final. A block from Kyle Hosford led to a Tala Fam Thiam lay up and got the crowd back on their feet. EJ Sligo’s Cian Lally made a huge three Zack Powell’s two free throws hoping to swing the momentum back into Sligo’s direction

Sligo’s cold shooting streak continued and they failed to take the lead in the final ninety seconds. Kyle Hosford saw his opportunity and penetrated the lane with a floater and the lead increased again thanks to Tala Fam Thiam. Hosford and Lehane stepped up, sinking free throws to seal the win for Demons.

UCC Demons head coach Danny O’Mahony was ecstatic following his side’s win. “When the draw was made originally we always had our eyes on the cup semi-final against Sligo. The guys were really up for it and I think that showed at the start.”

O’Mahony also praised the impact of the home crowd. ”It was massive you know, there were stages there in the game where we weren’t scoring and they weren’t scoring, but because their bench was making a bit of noise my guys heads were dropping. We were coming into timeouts and fellas were frustrated and we had to remind them to keep playing the game…the noise here and the fans spurred us on and got us over the line in the end.”