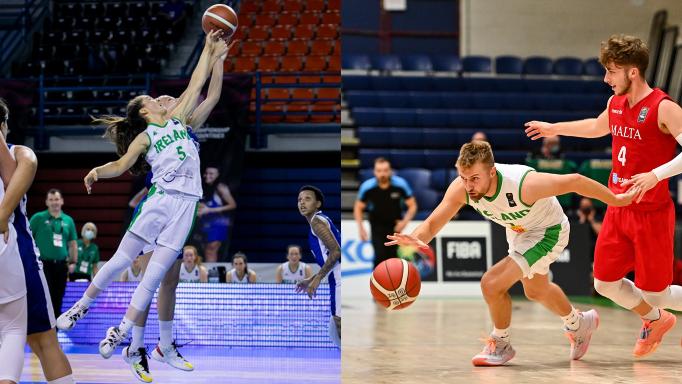 Following last week’s announcement of the groups for their respective FIBA EuroBasket Qualifiers, the fixture dates have today been announced for the Ireland senior women’s & men’s teams.

The Ireland senior women’s team were drawn in Group I of the FIBA Women’s EuroBasket 2023 Qualifiers alongside Belarus, Czech Republic, and Netherlands. Their opening game of the qualifiers will take place away against the Netherlands on Thursday 11th November, with their first home game that Sunday 14th November against Czech Republic. There are 10 groups in total in the Qualifiers. The 10 group winners and the four best second-placed teams will earn the 14 tickets from the Qualifiers to the big event. A total of 16 teams will compete at FIBA Women's EuroBasket 2023, with two berths reserved for hosts Israel and Slovenia. See their full fixtures below (times and venues to be confirmed).

The Ireland senior men’s team also begin their EuroBasket journey this November, when they face Cyprus away on Thursday 25th November. The men’s team have their first home game on Sunday 28th November, versus Austria. The Ireland senior men’s team are competing for a spot in FIBA EuroBasket 2025 and were drawn in Group A of the Pre-Qualifiers First Round alongside Switzerland, Austria, and Cyprus. There are three groups in total, with four teams – the three group winners and the best-ranked second-placed team – qualifying for the FIBA EuroBasket 2025 Pre-Qualifiers Second Round. Below are their fixture dates for the Pre-Qualifiers (times and venues to be confirmed).

“It’s exciting that the Ireland senior teams are now in the mix to compete at the highest level in Europe. These teams have worked hard to get to where they are, and it has paid off. While the women’s team have a year-long break after their first two fixtures, the men will be competing regularly over the coming months, which will really serve them well. It also gives Ireland fans plenty to look forward to! There’s a lot of work ahead for these teams and our organisation as a whole, but absolutely everyone is looking forward to the challenge”.