The Kerry club established an early 5-0 lead in the opening minute, thanks to Aaron Calixte’s three point jump shot and an Quigley layup. The score of the opening quarter was undoubtedly the dunk by Devin Gilmore three and a half minutes in, to reduce the deficit to 9-6. Garvey’s Tralee Warriors were struggling to contain Stefan Zecevic, he scored 11 points in the opening quarter to help Darren McGovern’s side to a 22-19 lead. 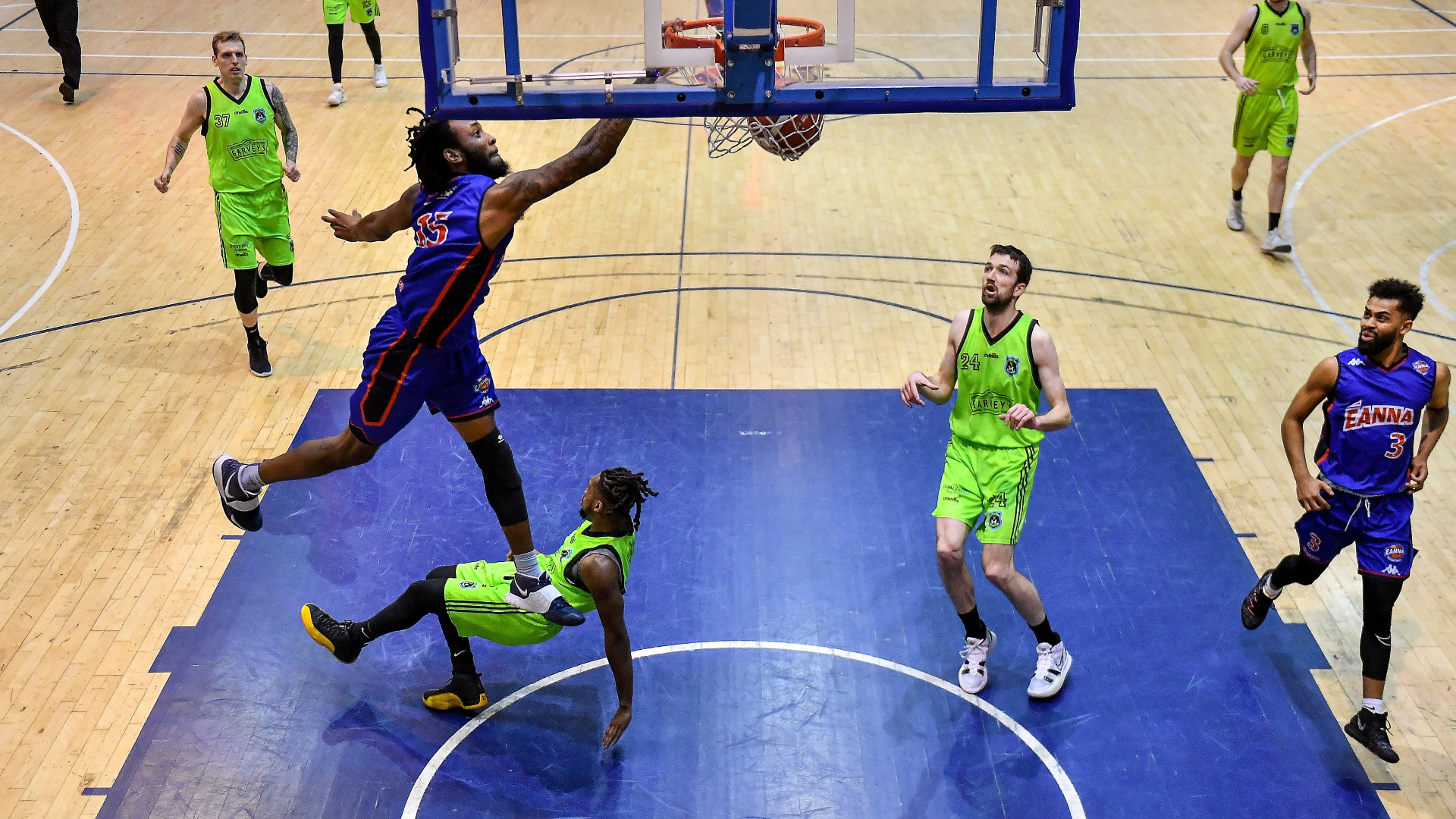 Three minutes into the second quarter DBS Éanna stretched their advantage to seven points, 34-27, thanks to a Romonn Nelson three point jump shot. Quigley responded with a dunk, to close the gap once more.

But DBS Eanna held another seven point lead by the midway point, 39-32, courtesy of a Nelson layup and Glimore’s second dunk of the day.

Garvey’s Tralee Warriors forward Rolands Elsknis took a heavy fall late in second and hobbled off, but managed to return in the third. In the meantime the 6’8” Roso was making telling contributions to reduce the deficit to 43-30 by half-time, the forward had 17 points in the first half.

Garvey’s Tralee Warriors went in front three minutes into the third thanks to a Daniel Jokubaitis layup, they extended it through a Darragh O’Hanlon layup and a Roso free throw, to lead 49-45. But a dunk by Zecevic stemmed the tide. The sides exchanged points with John Dowling’s side maintaining their four-point advantage by the end of the third, 58-54.

Devin Gilmore showed excellent defence at the basket throughout, one block two minutes into the final quarter saw him land on top of Zecevic, with both players gingerly coming back to their feet their teammate Alex Dolenko went down the other end to level matters at 60-60.

Mark Reynolds’ three in the third minute of the fourth quarter made it 63-60 to DBS Eanna and he followed it with a two point jump shot to open up a five point gap.

A monster three by Fergal O’Sullivan fired up the Garvey’s Tralee Warriors support, but in a frantic quarter Dolenko stole the ball off Aaron Calixte and raced away for a dunk to re-establish a four-point lead for DBS Éanna, 67-63, midway through the quarter.

Two more O’Sullivan three pointers helped Garvey’s Tralee Warriors to within one and with 1’54 left on the clock they hit the lead, 71-70, thanks to a Kieran Donaghy layup. With the shotclock running out Calixte found Roso beautifully inside, who made it 73-70 with 80 seconds left. Garvey’s Tralee Warriors added points from the free-throw line to close it out 79-70.

John Dowling, Garvey’s Tralee Warriors head coach praised the impact of his captain O’Sullivan afterwards. “It's hard to catch your breath in the middle of all that, Éanna and ourselves have had many a battle over the years, and it was just an unbelievable game of basketball. It's some advertisement for the game and where it is at the moment. Fergal O'Sullivan, an Irish ball player comes off the bench and scores three 3’s, gives us some daylight. But look we're just delighted with getting over the line and getting to the final now. And fair dues to the crowd, they really spurred us on, but yeah individually we all came up with big performances at different times, and we're just delighted to be there.”

Darren McGovern, DBS Éanna was rueful afterwards. “It's a major disappointment, we came in here with big plans. Obviously last couple of weeks, like everybody, we were majorly affected (by Covid-19) but it's not an excuse really at the end of the day. We played quite well in spurts, we took the lead quite a few times, we just couldn't hold onto it. We had massive games from a lot of guys we didn't expect to have massive games, so delighted with that. Our objective was to stay in the game the entire time, they're a fantastic outfit, really good players all round, so I'm really proud of the players. They didn't flinch, didn't wilt, just kept going to the end. It's a disappointing day.”