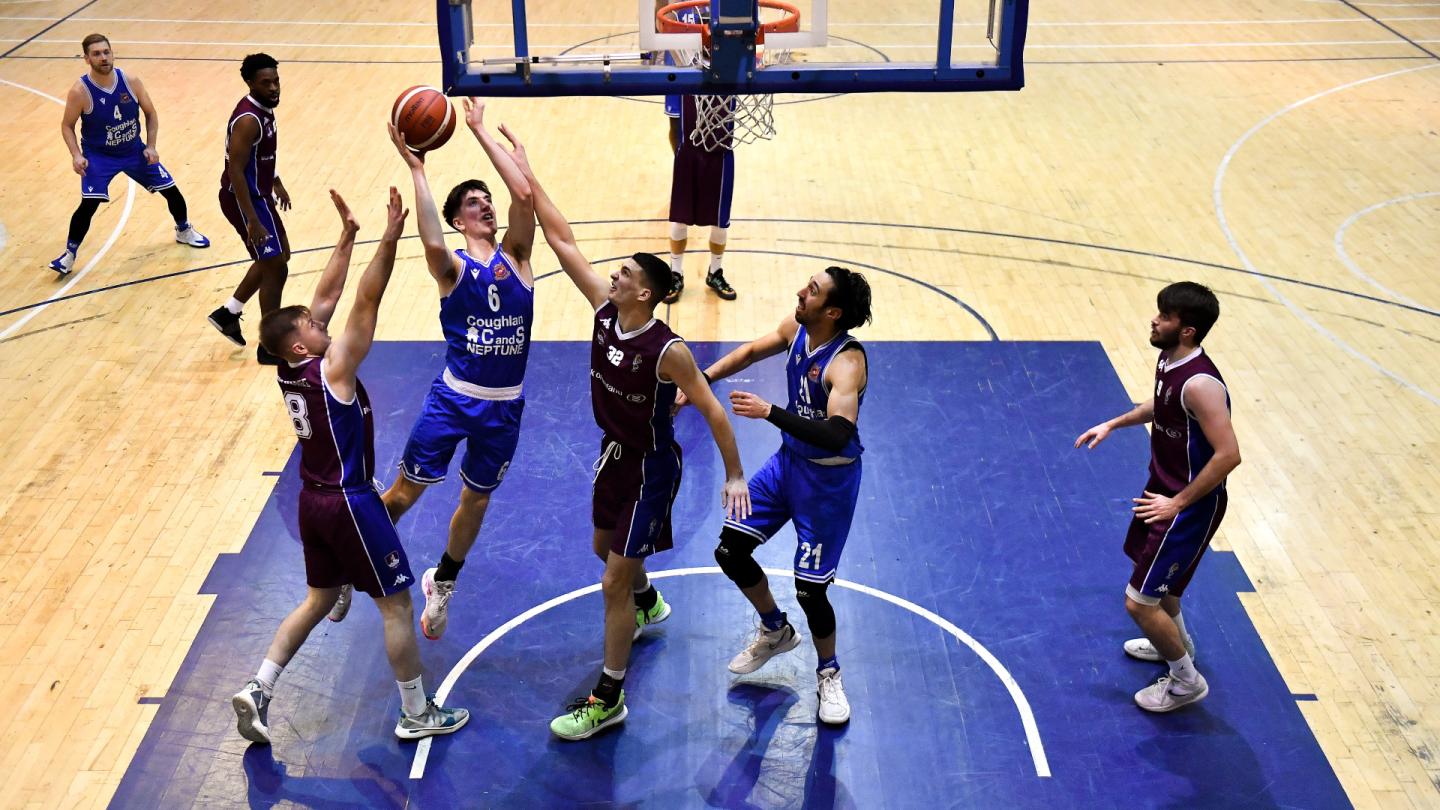 It was a tight opening quarter, NUIG Maree got out to an early 8-4 lead, reduced by a Cian Heaphy dunk. Heaphy had a strong performance overall, with 23 points, highlighting why he was selected in the extended Ireland senior men’s squad for last November’s FIBA EuroBasket 2025 Pre-Qualifiers.

Nil Sabata brought it level on the six minute mark, at 13 each and C&S Neptune would lead 24-20 by the end of the opening quarter.

Heaphy picked up 11 points in the second quarter, including two more dunks, the last of which made it 47-40 with a minute and a half to go. Shortly afterwards Eoin Rockall missed two free throws, while Roy Downey converted both of his and the four point swing meant a 49-40 lead for C&S Neptune and they would go into half-time with a 10 point cushion, 53-43.

C&S Neptune captian Roy Downey hit back-to-back three’s to make it 65-51 with a little over three minutes gone in the third and the game appeared to be getting away from NUIG Maree, however the Galway club responded with layups from Lovre Tvrdic and Deondre Jackson to make it a seven point game, 67-60, at midway point. 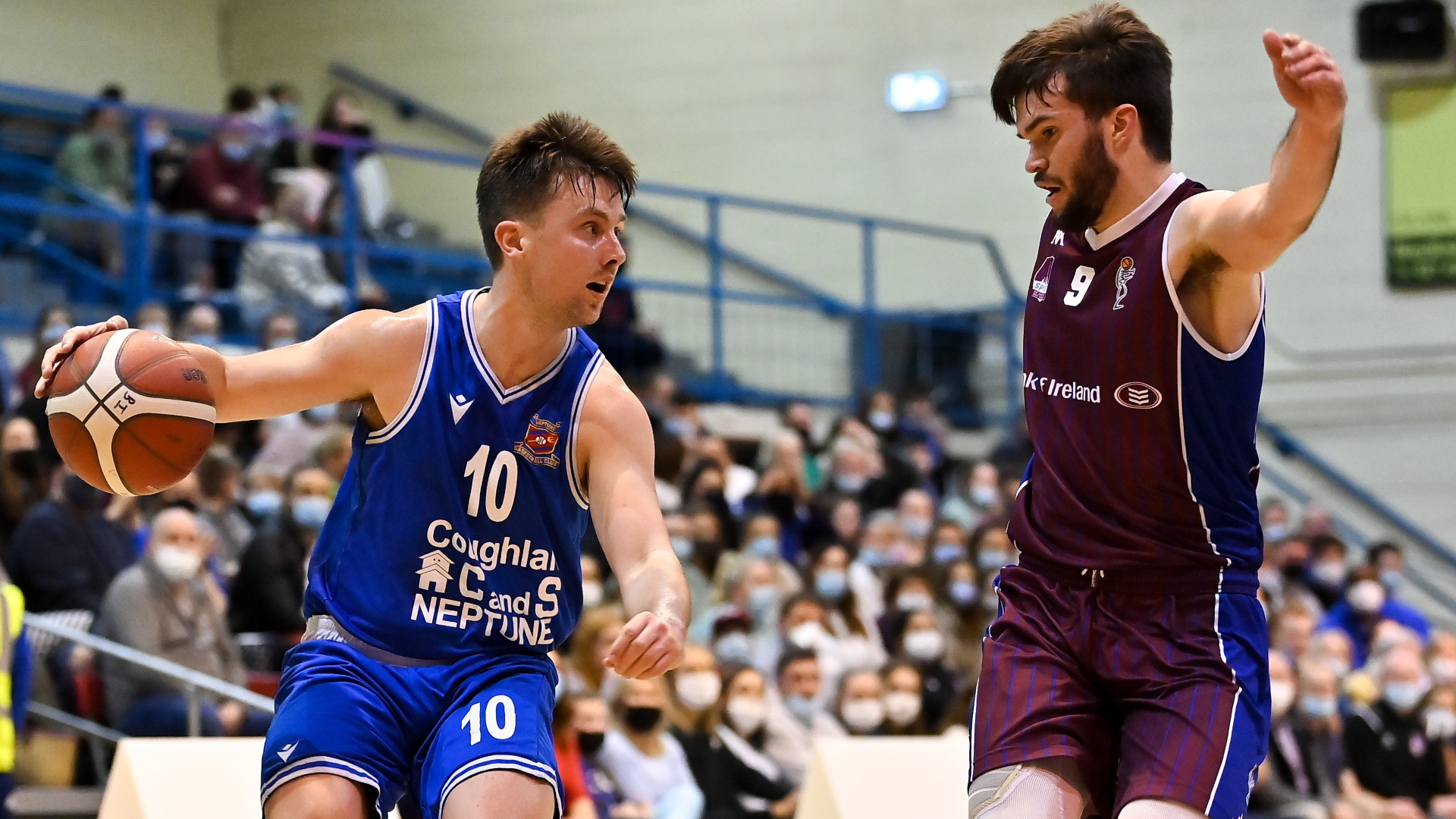 Richaud Malik Gittens landed a three point jump shot at the second attempt with just under four minutes to go in the quarter and it was 72-60 to C&S Neptune. It prompted an immediate timeout call by NUIG Maree head coach Charlie Crowley, but C&S Neptune stretched their advantage to 16 points by the end of the quarter, leading 81-64.

NUIG Maree were chasing the game, but kept plugging away, Jackson’s dunk made it 97-85 with three minutes to go. But C&S Neptune weren’t to be caught, a dunk from Gittens in the final minute capped of a fine individual performance, he ended with 16 points, 10 rebounds and two assists.

Speaking after their 103-92 win, C&S Neptune player/coach Colin O’Reilly said: “Not a fancy spectacle by any means, but I think both teams pushed the pace, so it's probably a lot more possessions than a normal weekend for league games.  It's an advantage playing at home, but it also adds some pressure as well. If you look at the key statistics for both teams, we both match up...we were both evenly matched. It turned out exactly how we thought it would turn out so we were just happy to be the ones who won it."

Charlie Crowley, NUIG Maree head coach added: “Obviously bitterly disappointed, we prepared as best we could for the game. Lads came out as well as they could, and we still have savage belief in our group. We put a plan in place and some of our shots just didn't roll when we needed them to roll. We maybe took the wrong option once or twice. But I think anyone there can see that we fought to the bitter end, and we had it back to under ten. And John Burke had a three there at the end, with the fantastic crowd that we had that travelled, if that had gone in it could have been a different game, but a lot of credit has to go to Neptune, they were phenomenal. They hit a lot of shots that we missed, and that was really the difference tonight.”