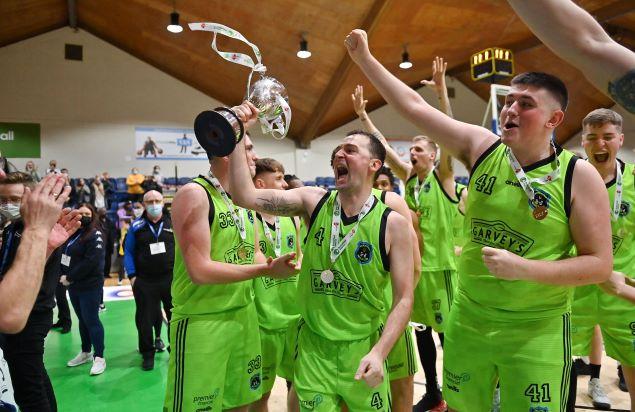 It took almost two minutes for the game’s first points, when Jokubaitis landed a jump shot. Nils Sabata got C&S Neptune on the board and not long afterwards a Cian Heaphy dunk in the fourth minute brought the Cork club’s supporters to their feet. With 3’44 to go in the first quarter a three-point jump shot from Garvey’s Tralee Warriors captain Fergal O’Sullivan established a 9-5 lead. Nils Sabata was C&S Neptune’s biggest scoring threat, his layup not long afterwards reduced the deficit. Sabata would finish with a game-high 21 points. 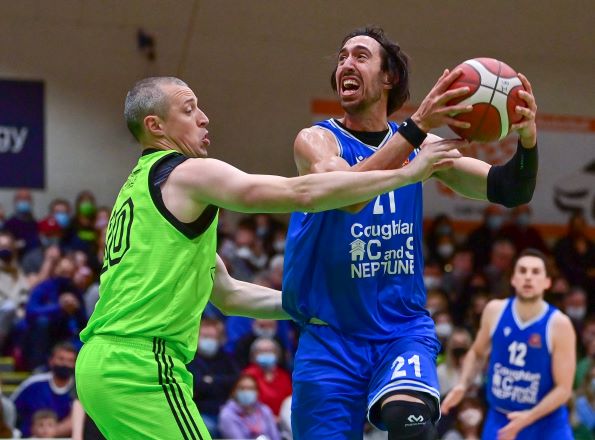 In stepped a fired up Kieran Donaghy scoring four points, a layup and along with a rebound, after following up Eoin Quigley’s three point attempt, to make it 13-7. He waved his arms to spark up the already vocal Warriors fans even further, who responded in kind.

Miles Washington made it a two point game, before a pair of Jokubaitis free throws, followed by Donaghy rebounding his own layup attempt and it was 17-9. Donaghy had six points and four rebounds in the first quarter. Aleix Tarradellas dispatched a much-needed three point jump shot for C&S Neptune in the dying seconds to make it 17-12 at the end of the first quarter.

Neptune got the first points of the second, a Nils Sabata layup and subsequent extra free throw, 17-15. Quigley and Sabata exchanged layups, before a Jokubaitis three point jump shot and five points from Aaron Calixte and a Ronalds Elsknis layup stretched it to 29-17. Eoin Quigley and Roy Downey exchanged threes. Quigley and O’Sullivan baskets opened up a 15 point lead with two minutes to go, 38-23. C&S Neptune picked up some points from the free throw line, but it was Garvey’s Tralee Warriors who had the final say - a Jokubaitis three point jump shot - to make it 43-28 at half-time. 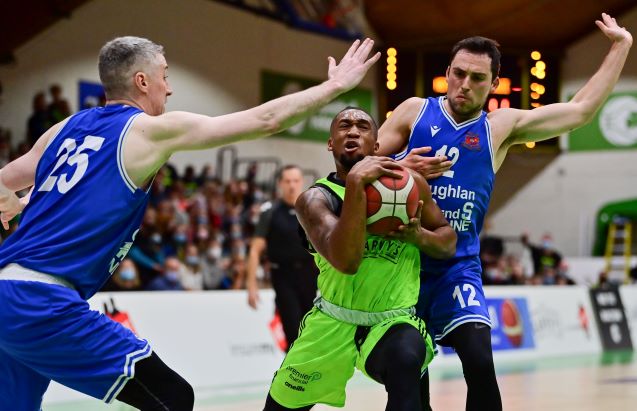 The first points of third went to Warriors, before Roy Downey three point jump shot got his side back into it, trailing 47-31. Eoin Quigley’s second three of the game brought Warriors to the half century of points. Two Miles Washington dunks helped C&S Neptune close the gap to eight points, 50-42, three minutes into the quarter and a timeout was called by Garvey’s Tralee Warriors. Midway through the quarter Nikola Roso’s basket made it a 12 point game, the Kerry club 54-42 up, with Calixte’s two point jump shot stretching their advantage further moments later. It would be 64-50 by the end of quarter.

A long range three point jump shot was landed by Jokubaitis in the opening minute of the fourth and with a 17-point lead, it looked like it was going to be too much for C&S Neptune to claw their way back. With 6’35 remaining Colin O’Reilly’s three point jump shot saw the Cork club trail 71-57, but Darragh O’Hanlon responded with a long range three point jump shot 30 seconds later. Rosso had a fine second half and made several telling contributions at both ends, particularly in the fourth quarter, with multiple layups and some terrific defensive blocks. Aleix Tarradellas has five points in the last minute or so, but it wasn’t to be their day, Garvey’s Tralee Warriors winning 88-75.

John Dowling, Garvey’s Tralee Warriors head coach, was elated afterwards. “We dreamt this dream – Kieran (Donaghy), myself, Pat Carey seven years ago and we knew the talent was there, we knew the underage structures were there, we just needed to get the club together. The beauty with Tralee Warriors is that it’s a franchise, one team in Tralee, everyone is behind it, sponsors Garvey’s, O’Neill’s, Premier, they’re all behind it, pulling it together and it is driving Tralee to basketball to another level that I didn’t think it could go to. Obviously we always wanted to get to the Cup final, to get here today versus Neptune, obviously Colin (O”Reilly) is doing a great job there at Neptune, they’ll be back. We felt today that we needed to play good defence, we did, it came out trumps for us. But for the whole club, the whole town of Tralee unbelievable effort, unbelievable sacrifice. I am just delighted for everybody.”

Kieran Donaghy, who has won multiple medals in his distinguished sporting career, was asked where a National Cup title ranked - “It's right up there, it's been six years since this club was amalgamated from Brendan's and Imperials, and this was always the dream. I just said thanks to Jim Garvey there, thanks for sticking with us, because we'd promised Cups maybe a lot earlier then we should have. But look, it's been a great journey and it's been a tough Cup, you know that semi-final against a brilliant (DBS) Éanna team a few weeks ago in Cork was tough. We'd (Tradehouse Central) Ballincollig in the first game of the Cup, and they're top of the Southern Conference at the moment, so we'd no easy ride. Delighted that the place could open a bit more and let more people in, because the atmosphere was electric. I was a bit sorry all week that it was going to be half capacity, but to see the buzz and the atmosphere in here was amazing.”