Trinity Meteors moved three points clear at the top of the MissQuote.ie Super League, following a 70-59 road win at i3PT Fr. Mathews. University of Galway Maree remain top of the pile in the InsureMyVan.ie Super League South Conference, following a 68-46 derby win against Moycullen, while Belfast Star, DBS Éanna and Killester all won and remain in a three-way tie at the summit of the North Conference.

Trinity Meteors moved to a 6-1 record in the MissQuote.ie Super League, with two Irish internationals to the fore in their 70-59 victory at i3PT Fr. Mathews. Dayna Finn top scored with 19 points, while Claire Melia was in fine form hitting 10 points, ahead of next Sunday’s FIBA Women’s EuroBasket 2023 Qualifiers game with the Netherlands. 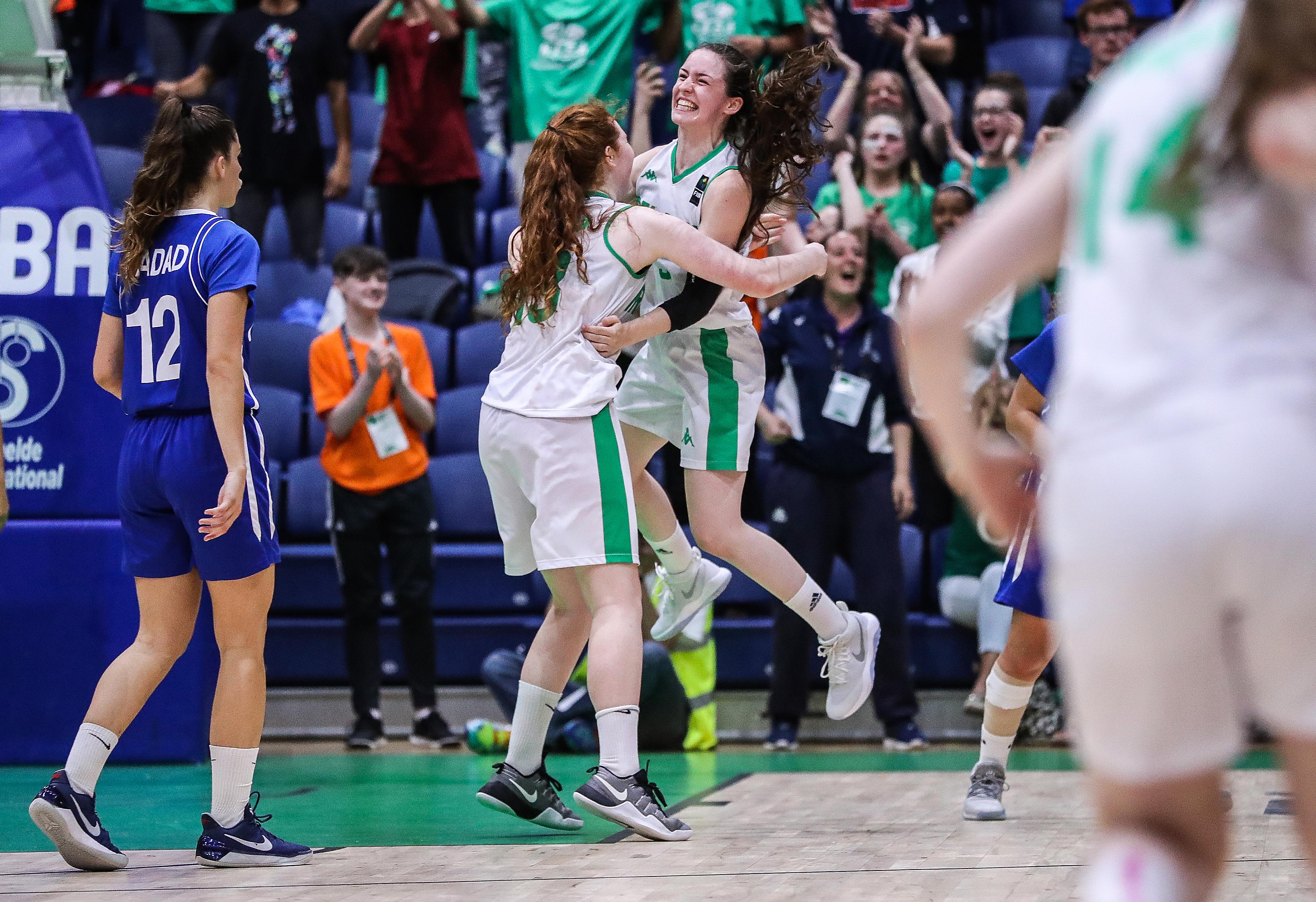 Speaking after the win, Trinity Meteors head coach praised the well-rounded performance from his team.

We’re delighted with the win over a very strong Fr Matthew’s side. We knew coming here that it was going to be a battle because of their defensive record. I was thrilled with the balance of scoring from our girls, with eight girls contributing on the scoresheet to help get us a very valuable win.

On Friday, DCU Mercy missed the chance to go top, slipping to a narrow 64-63 home defeat to Killester. Chanell Williams top scored with 25 points for Killester in the derby.

Head coach Mark Grennell is hopeful of using the win as a platform going forward over the next few months.

“Great win against a very good team. We hung around in the game for long enough and rode our luck. Thankfully we made some big plays at the right times late on, to come away with the win. It gives us a great platform now to build off of as we begin to get healthy as a squad going into a big December and January.”

One of the games of the weekend saw Waterford Wildcats needing overtime to overcome Singleton SuperValu Brunell, 84-70. It was 70 apiece after four quarters, but Waterford Wildcats powered clear in overtime. Two Irish internationals also looked in promising form, Sarah Hickey with 16 points for the victors, while Ireland captain had 18 for Singleton SuperValu Brunell. 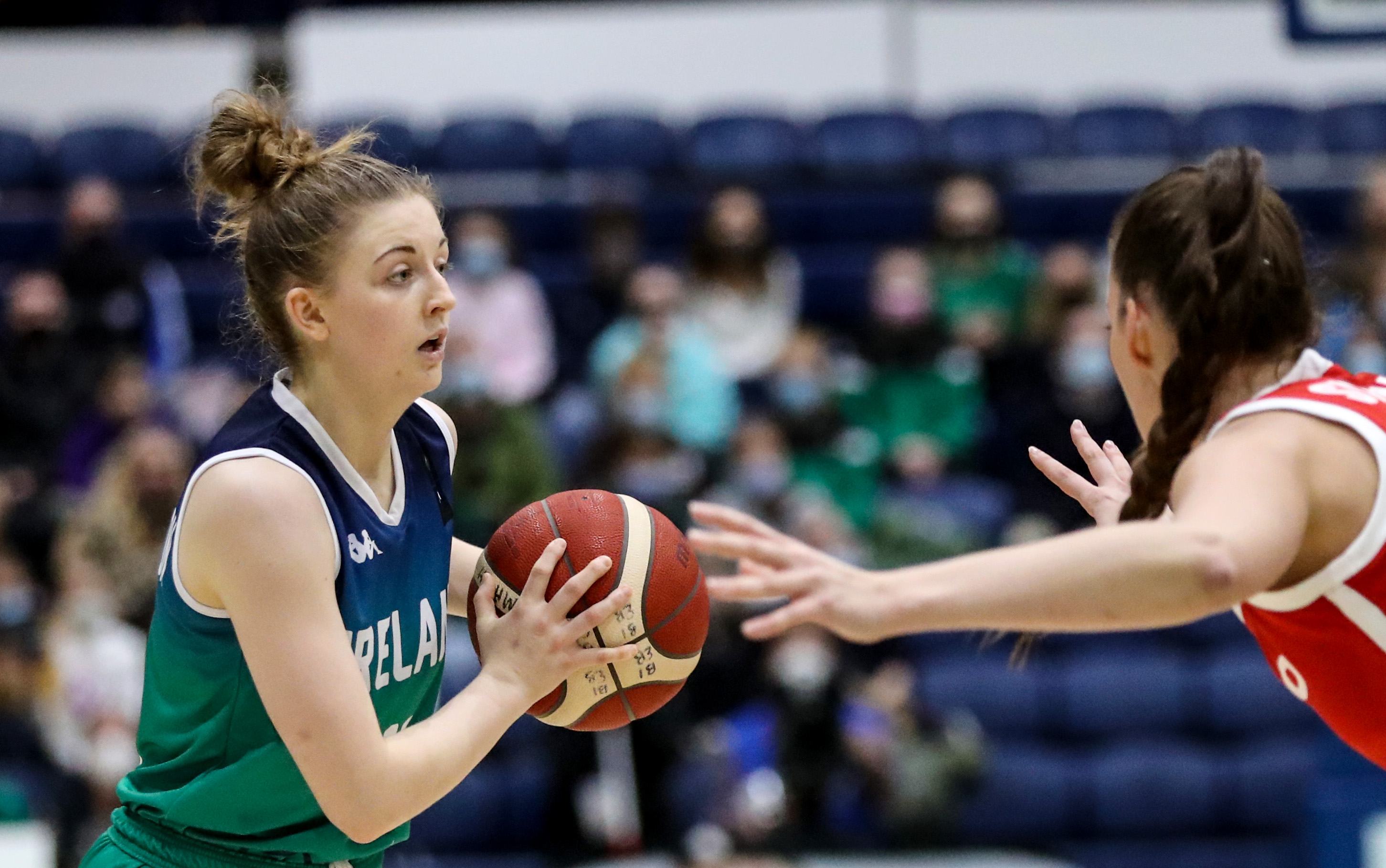 That win takes the Wildcats to a 5-2 record for the season and speaking afterwards head coach Tommy O’Mahony expressed his pride in his team and its determination.

“Delighted with the win. Playing against Brunell is always a tough contest and this contest proved no different. We worked really hard throughout the game and we were lucky to bring it to overtime. The girls really stepped up when it was needed and I couldn't be more proud of them. Attitude immediately switches to the (InsureMyHouse.ie National) Cup game against Liffey (Celtics) and we are under no illusions of how much work we need to put in to be ready for them.”

Leixlip Amenities Liffey Celtics secured their third win of the season, a convincing 95-58 victory over a depleted University of Galway Mystics side, who were without a couple of key players at the Kingfisher, while another key figure - Kara McCleane - was forced to withdraw early on through injury. Brittney Thibeaux scored 28 points to top the charts in a commanding performance. Ciara McCreanor impressed for Mystics with 20 of her own.

Head coach of Leixlip Amenities Liffey Celtics, Karl Kilbride, singled out the young players for praise in a well-rounded showing.

“I thought we did a good job of taking advantage of match-ups, getting the ball inside. Mystics came into the game short-handed and were dealt a fairly big blow when Kara McCleane went down early.

“Those games are sometimes tricky. We had some really big runs at times and then would hit some lulls and get punished for it. They shot the ball well from three, but we did a good job of keeping bodies in front of them all game. I thought our young girls did an excellent job in the second half, Caoimhe Gilligan and Shauna Curran had 17 between them.

“While we’re happy with the result, we know we need to pick up the performance another notch or two for Waterford Wildcats in the (InsureMyHouse.ie National) Cup in two weeks’ time if we want to advance.”

The Address UCC Glanmire and Ulster University don’t play their round 7 fixture until next Saturday.

The University of Galway Maree remain the team to catch in the InsureMyVan.ie Super League South Conference. They kept up their impressive start to the season by beating Moycullen 68-46 in the local derby to take them to a 6-1 record. Moycullen remain without a win so far this season and Maree showed the gulf in class early on, opening up a ten point lead after the first and never looked back. Zvonimir Cutuk topped the scoring charts with 18 points for the Galway outfit.

“Good to get another win under the belt, but that’s all it was. Unbelievable crowd in the Kingfisher for the game. Onto Tralee next week,” said University of Galway Maree head coach Charlie Crowley.

Leading the chase of University of Galway Maree in the South Conference are Emporium Cork Basketball and Energywise Ireland Neptune, both of whom won to move to 5-2 records.

Energywise Ireland Neptune got back to winning ways on the road, overcoming Flexachem KCYMS 108-87, after recent back-to-back defeats. Colin O’Reilly’s side found themselves with plenty of work to do in the first, being down by ten, but they showed mettle and some scintillating shooting in the second quarter, to win that one 35-22. It was more of the same for the remainder. Irish international Jordan Blount top scored with 27 points for Neptune, while Robert Alan Kelly Jr. finished on 26 for the hosts.

Speaking after the game, Energywise Ireland Neptune head coach Colin O’Reilly said: “Happy with the win. We understand how tough it’s to win in Killorglin, so it gives us a nice confidence boost.” 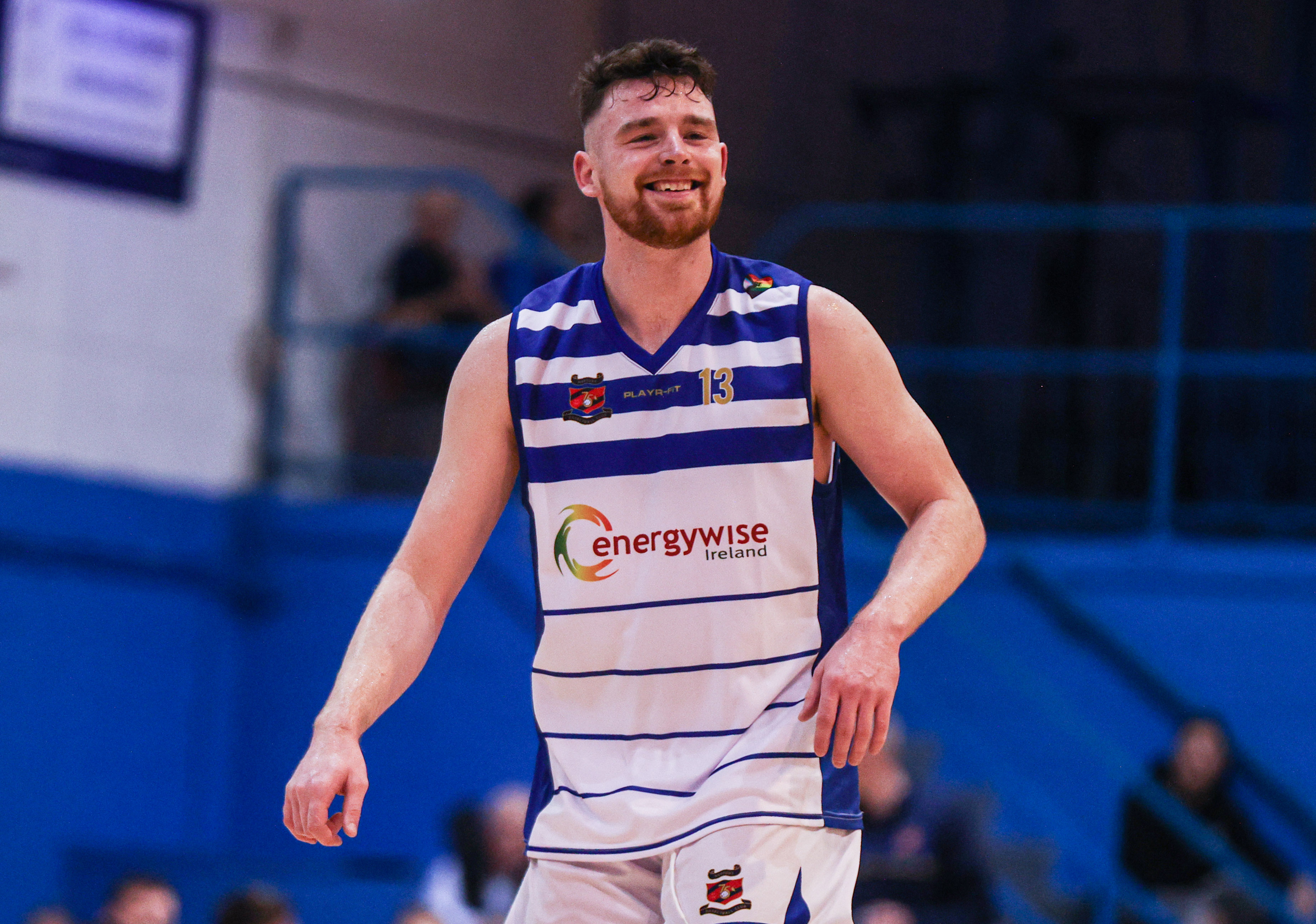 Emporium Cork Basketball inflicted yet another home defeat on reigning InsureMyVan.ie Super League champions Garvey’s Tralee Warriors, winning 95-85. The two sides couldn’t be separated for the majority of the first half, but a late flurry from Ciarán O’Sullivan’s outfit saw them going in with an 11 point lead at the interval. Despite a 25 point tally from De’Ondre Jackson, the Kerry side couldn’t bridge the gap. John Dawson scored 21 for Emporium Cork Basketball.

Ciarán O’Sullivan, Emporium Cork Basketball head coach, said: “Good performance in the Tralee Complex, where it’s always difficult to get a result. We were fairly free flowing offensively for the most part and locked in defensively in the key moments. Very happy in how we handled the pressure and knocked down our free throws in the closing minutes."

It’s a three-way tie at the top of the North Conference with Belfast Star, DBS Éanna and Killester leading the way, each of whom improved to 5-2 records with weekend wins.

Killester had to show plenty of character to defeat Griffith College Templeogue, 93-80. Mark Keenan’s side had started strongly by opening up an early 14 point lead, however Killester timed their commanding spell well, clocking up 31 points in the final quarter. James Gormley top scored with 24, while Paul Dick and Gregorio Jesus Adon Encarnacion clocked up 23 for Killester

Speaking after the win, Killester head coach Brian O’Malley had this to say:

“It was an unusual experience being the home team in an environment they were probably more comfortable in. We were slow out of the traps and James Gormley, who had a fabulous game, was giving us lots of trouble on both ends. Second quarter was a bit better from us, but we still made a few too many errors.

“Credit to Templeogue, they stretched our defence a lot and it seemed we were at breaking point a couple times. Credit to the lads, the last 14 minutes were really good, we shared the ball much better and guys were getting good looks in rhythm. We'll have a look at a couple things and hopefully make a few improvements for next week.”

DBS Éanna won 91-77 at Bright St. Vincent’s. The home side started strongly, leading by as many as eight late in the first quarter, but Éanna found their feet to lead by seven at the interval and couldn’t be caught for the remainder. Bright St. Vincent’s had Donovan Fields in red hot form, he drained 38 points, while former DBS Éanna player Stefan Zecevic scored 12 against his old side.

Josh Wilson top scored for the victors with 24. 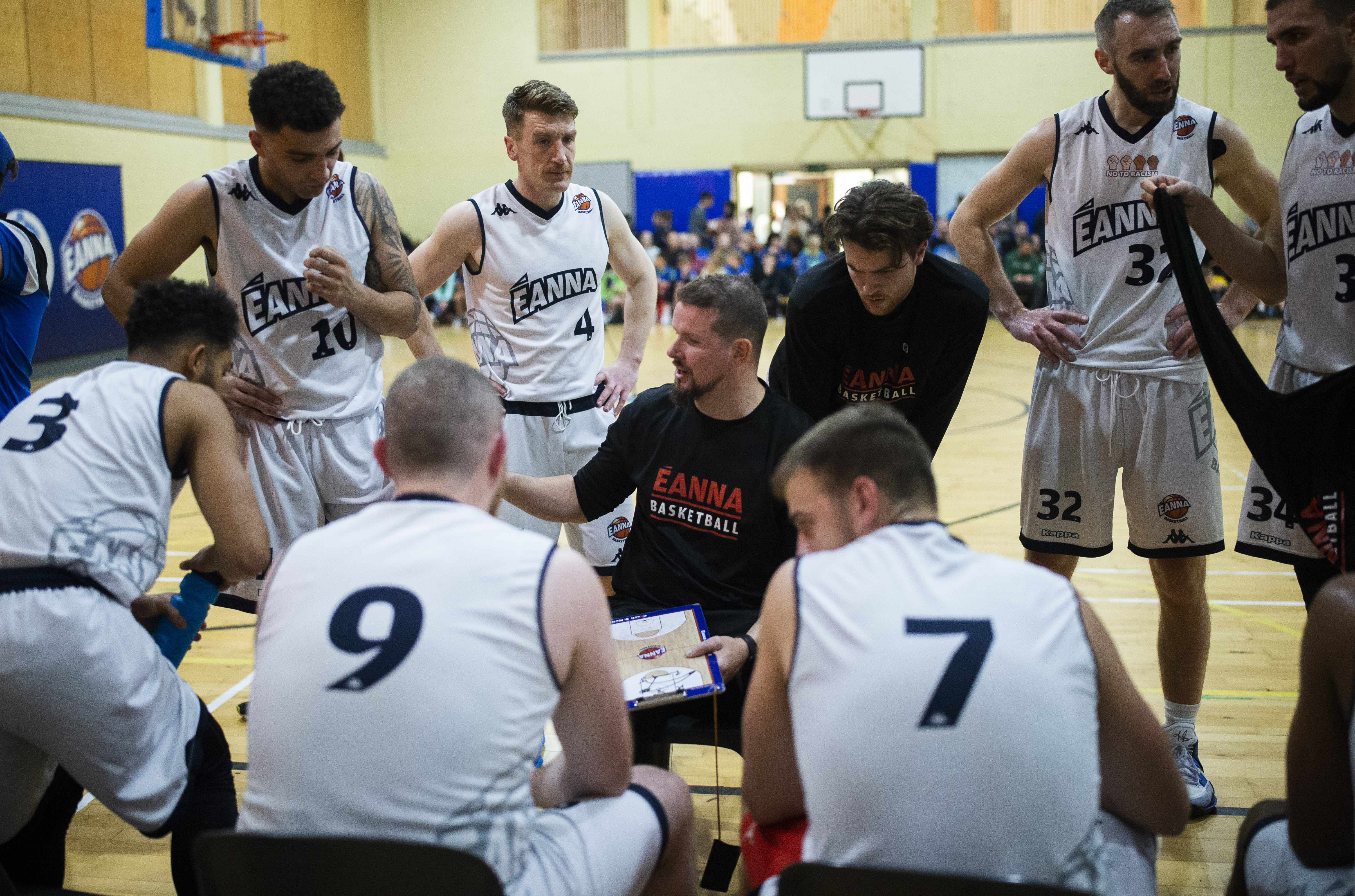 DBS Éanna head coach Darren McGovern praised his team and its efforts on both ends of the court after the game.

“We really put in a serious shift tonight. Defensively and offensively we delivered. Another great spread of performances from the squad! That's what I am most excited about. The guys are playing for each other. We are playing well and adapting every week to what is thrown at us.”

Belfast Star dug deep to take their record to 5-2 this season with a well-rounded performance against a youthful UCD Marian side. Adrian Fulton’s side showed character to come from behind at the interval to win 72-61. Star also excelled on defence, keeping UCD Marian’s talisman and the league’s top point scorer Jonathan Jean to 13 points. Three players topped the scoring charts with 17 each; Max Cooper and Max Richardson of Belfast Star and Denis Melniciuc of UCD Marian.

Adrian Fulton heaped praise on his team as a collective following the win.

“Every coach talks about the importance of having a squad in order to compete over the season. This was a game where our depth had a significant impact. Players who have played limited minutes this season really changed the game in our favour. Oisin Kerlin was terrific at both ends of the floor. Paddy McGaharan showed all his experience and in particular at the defensive end he was excellent. Liam Pettigrew set the tone for us in terms of raising the intensity of our play. These players allowed others to take their opportunities and keep the scoreboard ticking over. Ioannis (Liapakis) is doing a brilliant job with his young squad and they gave us problems for long stretches. It was a solid performance by us tonight.”

In Sunday’s game, EJ Sligo All-Stars, buoyed by the 29 points of Gregory Poleon, survived a late comeback from UCC Demons to secure their fourth win of the campaign, 100-97. Tala Fam Thiam of UCC Demons headed the scoring charts, with his 32 point tally.

After the win, EJ Sligo All-Stars head coach Shane O’Meara expressed his delight at getting back to winning ways. “Great to get back on track with a win. We have stuck together throughout a few tough weeks and I was delighted for the players to see their hard work pay off. Blue Demons were never dead today and it took everything we had to get over the line.”

Portlaoise Panthers kept the sole unbeaten run across the National League alive, with a dramatic win against Limerick Celtics, edging out a close contest 88-85 in MissQuote.ie Division 1. Alyssa Velles top scored with 33, bringing her average to an impressive 25 this season.

McEvoy’s Cavan Eagles have the same points tally at the top. They took their record to 6-1 with a 76-41 victory over Abbey Seals Dublin Lions. In a well-rounded performance, the scoring exploits of Casey Mulvey (16), Carnethia Brown (15) and Alarie Mayze (14) helped them to their win.

St Paul’s Killarney were convincing 97-66 winners against SETU Carlow. The top scorer in the league, Scout Frame of SETU Carlow contributed with 32 points, but it wasn’t enough for the hosts.

It’s a three-way tie at the top of the InsureMyVan.ie Division 1 with Drogheda Wolves, Limerick Sport Eagles and Moy Tolka Rovers out in front with 6-1 records.