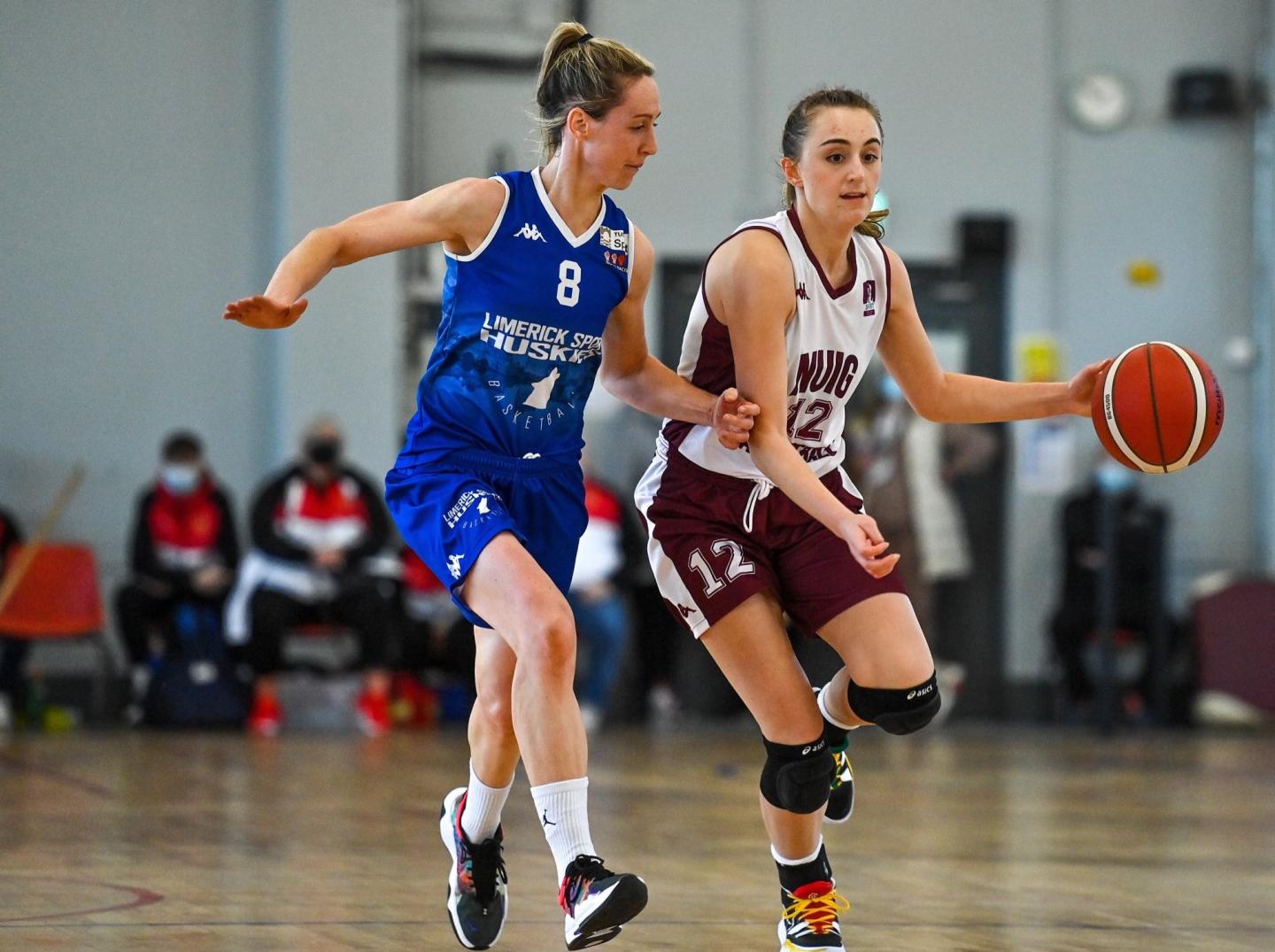 NUIG Mystics defeated Limerick Sport Huskies 70-54 in their Women’s Division 1 Cup semi-final at Parochial Hall and will play Griffith College Templeogue in the decider at the National Basketball Arena in two week’s time.

The second Women’s Division Cup semi-final got off to a flying start, as both Limerick Sport Huskies and NUIG Mystics brought serious pace from the tip-off. The Limerick Sport Huskies bench offered support, as their team trailed by six in the opening minutes, and head coach Desmond O’Sullivan instructed his team to maintain composure, as they trailed by five points at the end of the first quarter.

NUIG Mystics extended their lead, as they suffocated their opponents with a defensive press clocking up steals and converted layups. Their vision and passing created open looks inside, as Limerick Sport Huskies struggled to find an answer in the second quarter.

Taylor Herd fought hard to keep her team in the game, with strong drives and aggressive rebounding, as NUIG Mystics Head Coach Paul O’Brien called a timeout to cut out any potential swing in momentum. When both teams retreated to the dressing rooms at half-time NUIG held a fifteen-point lead, 36-21.

An opening layup by Yuleska Ramirez Tejeda set the tempo for the second half, as the Limerick Sport Huskies supporters found their energy once again. Their defensive intensity increased, with interceptions from Taylor Herd and Ramirez Tejeda. The momentum continued for Limerick Sport Huskies as a reverse layup by Herd cut the deficit to six points.

Irish underage International Hazel Finn took the game into her own hands with a quick six points and three offensive rebounds for NUIG Mystics. Her determination proved infectious as Áine McDonagh displayed her athleticism with two huge blocks.

With six minutes to go Limerick Sport huskies needed a score. Herd, who was aggressive throughout the game, fought for the offensive rebound and Sinead Nihill’s vision found Ramirez Tejeda cutting to the basket for a well-needed score. NUIG Mystics’ Courtney Cecere encouraged her teammates to finish out the game strongly and they finished with a sixteen-point win.

NUIG Mystics head coach Paul O’Brien praised his team's defensive efforts, “That’s what we’ve been doing all year, it is really looking to pressure the ball. We’ve got really good young guards with great ball pressure, that creates easy turnovers and easy baskets for us which we need.”

“Huskies are a great team, they really made it difficult for us, we couldn’t buy a basket, but that was always going to be the case. We haven’t really practiced in three weeks because of Christmas and a COVID situation, so defensively we were brilliant, we rebounded the ball really well, but hopefully in two weeks weeks we’ll shoot the ball a bit better up in Dublin.”