Defending MissQuote.ie Super League champions The Address UCC Glanmire and InsureMyVan.ie Super League holders Garvey’s Tralee Warriors got off to a winning starts on the opening weekend of the National League.

Garvey’s Tralee Warriors were narrow 105-103 overtime winners against Flexachem KCYMS in a thrilling local derby. The home side had Daniel Jokubaitis to thank, his two point jump shot with just five seconds to go brought it level at 93 apiece and forced overtime. The additional five minutes was also tight, it was Garvey’s Tralee Warriors’ summer signing De’Ondre Jackson’s driving layup with 11 seconds to go which clinched victory. The American, who joined from University of Galway Maree, top scored with 28 points.

John Dowling admitted his side rode their luck. “A nail biter of a game. Very lucky to get out with a win. Killorgan played some fantastic basketball, but the home crowd helped bring us across the line. Packed complex, a great advertisement for Kerry basketball.”

Head coach Mark Scannell said: “Yeah very good start, we played well for the first game of the season. I thought we got great contributions from our bench, which augurs well for the season. Killester are always dogged and hard to put away, but we wore them down, despite the effort of their two very good Americans. Our new additions settled in very well, so a good start, but lots to improve on.”

Neptune Stadium also hosted the local derby between Energywise Ireland Neptune and UCC Demons, which went down to the wire. A pair of Jordan Evans free throws at the end closed out the narrowest of victories, 92-91. Evans finished with a 27 point haul, including six converted from the arc. 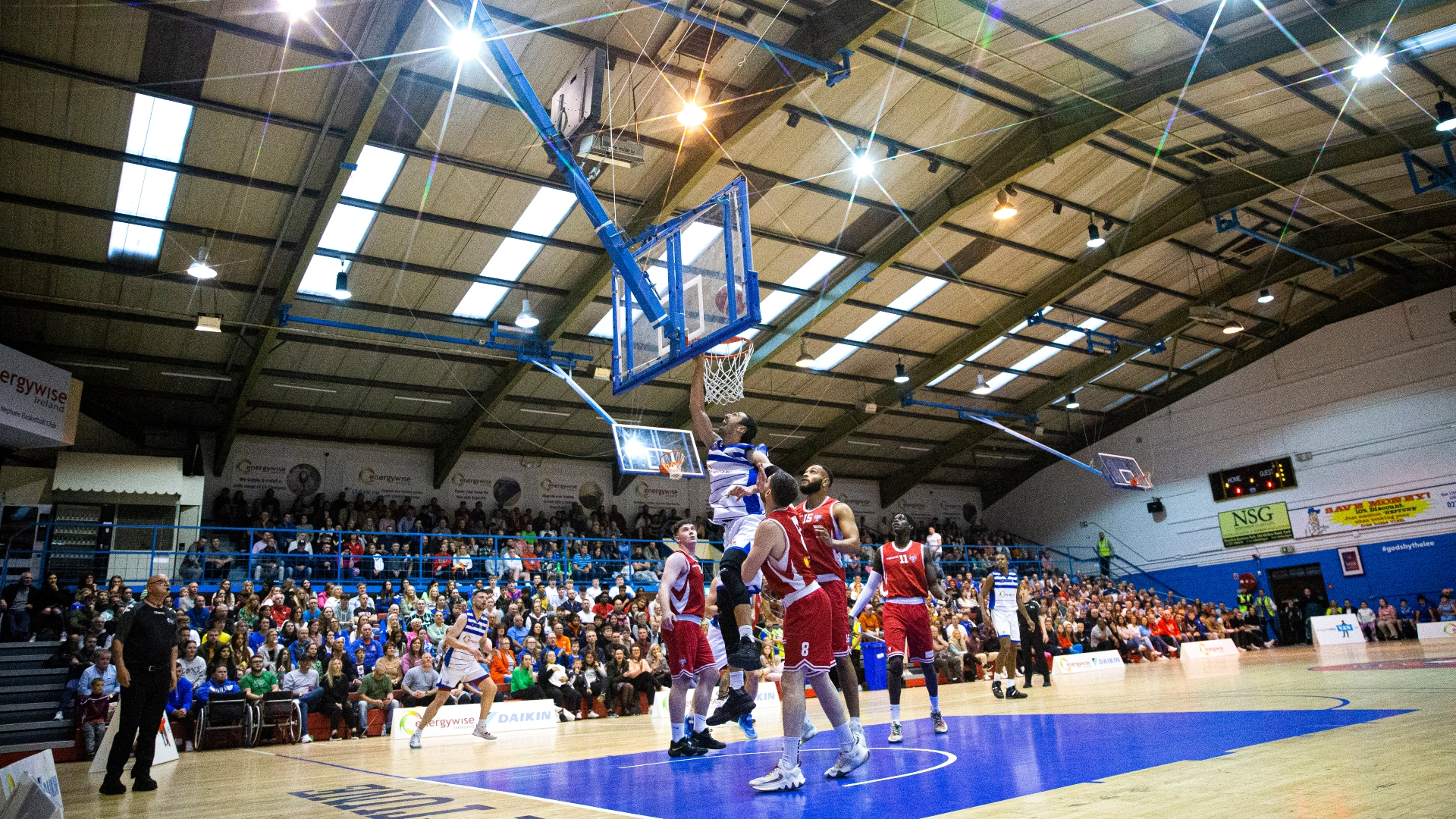 Player/coach Colin O’Reilly was relieved afterwards. “Nice result in a game that had pre-season quality, with the emotions of a derby game. The foul count did not help either team get into a flow and it was a case at the end of who could get important stops, as the offence disappeared. We move on now with the relief that pre-season is finally over and get into the rhythm of three sessions and a game every week.”

Daniel O’Mahony, UCC Demons head coach added: “We fought hard for 40 minutes. Unfortunately we didn’t get the calls when we needed them and the game was settled with Jordan Evans getting two free throws.”

Gregory Poleon scored a mightily impressive 40 points, including five three-pointers, as EJ Sligo All-Stars made a winning return to the InsureMyVan.ie Super League, thanks to their 93-82 road success at last season’s North Conference winners DBS Éanna.

Head coach Shane O’Meara was elated afterwards. “A great team effort. We put a lot of value on our defence and our teamwork and culture shone when eanna went on a run. Greg Poleon is the hardest working big man I've seen here, he's a beast in the paint and has an efficient mid-range and 3-point game, which makes him a match-up nightmare for other teams. But above all, he's a warrior and a leader, who makes our practices competitive and extremely enjoyable!”

2020 Super League winners Belfast Star had a 90-67 success against Bright St. Vincent’s. Their two Max’s – Richardson and Cooper - had 22 points apiece. There was the welcome Super League return of Aidan Quinn, after a knee injury ruled him out last season, he got through over 20 minutes and picked up 4 points in the process.

Belfast Star head coach Adrian Fulton gave his reaction to the win. “Very pleased with our performance tonight against a St. Vincent's team who have plenty of talent. We are a long way from where we need to be, but it's a good start and winning home games will be crucial in such a tough conference. Very difficult to pick out any individuals, as we got contributions across the board.”

Player/coach Ciaran O’Sullivan was happy his team’s display. “Delighted to get off to a solid start. The first game of the season can be tentative and tricky, but credit to our fans, they packed out Ballincollig Community School and helped us get momentum early on. A James Loughnane injury and foul trouble to Grant Ollson left Moycullen shorthanded for some of the game. We will need to continue to improve, as we have some really difficult challenges away to UCC Demons and Energywise Ireland Neptune in the coming weeks.”

Killester were 84-82 winners at UCD Marian. Their head coach Brian O’Malley stated: “Yeah delighted to get over the line. Looked hairy for us at end of third and start of the fourth, but we found a bit of offence when it mattered. UCD Marian really took it to us and defensively we've alot to work on. It's nice to win the first game of the season, it's been a while since we did that!”

Ioannis Liapakis, who has returned as UCD Marian’s head coach, added: “Our game tonight was very exciting to watch, unfortunately wasn’t the result we hoped for, but we’re very happy with our performance. We’re very young and promising team, but we don’t have experience and that was the main reason we lost tonight. Killester and especially Paul Dick has tones of experience and that was evident in the last 5 minutes of the game. Fair play to Killester and to Brian O’Malley for the win.”

University of Galway Maree were 91-72 winners at Griffith College Templeogue.

Their head Charlie Crowley said: “Great job by our guys tonight. Templeogue are a great team so anytime we can get a win up here you’re always happy. All focus now just is geared towards Killorglin at home.”

In the MissQuote.ie Super League highly fancied Trinity Meteors got the better of last season’s MissQuote.ie Division 1 champions University of Galway Mystics 87-70. It was the clash of two Finns, Hazel picked up 22 points for the Galway club, while sister Dayna had 19. Trinity’s summer signing, Claire Melia, ended on 15.

Waterford Wildcats came up trumps against the other newly promoted club, Ulster University, 81-69.

Reflecting on their success, head coach Tommy O’Mahony stated: “I am delighted to get the win. Ulster have some very good players and we are very happy to get over the line. We had a very good first half, in the second Ulster came back at us and we managed to hold them at arm's length. We understand we have a lot of work to do in order to maintain our high standards.”

“Liffey is always a tough place to go and get a ‘W’. I was delighted that we got so many contributions from different players. It’s only the first game of the season, so we will be looking to build on it when we have our first home game next week, back in Fr. Mathews Arena”, head coach Niamh Dwyer said.

An opening day buzzer beater by Ireland U20 international Lauryn Homan set Singleton SuperValu Brunell off to the best possible start in the MissQuote.ie Super League following a thriller against DCU Mercy in Cork this afternoon. Ireland senior captain Edel Thornton spent most of the afternoon in a scoring duel with her team-mate Rachel Huijsdens. The two combined for 60-points, Thornton contributing 35 of those en-route to the victory.

“Delighted to get off to a winning start especially at home. It was an epic game and DCU pushed us literally all the way. The most pleasing this for us was we never gave up and although we made some mistakes, we just kept playing through them and obviously delighted for Lauryn Homan to step up at the end and hit the winning shot.”

McEvoy’s Cavan Eagles followed in the footsteps of St. Pauls Killarney by picking up their first win of the season on their debut in the competition. It was an outstanding third quarter burst that proved the difference in this one, as the Cavan side outscored their opponents by 14-points. Alaria Mayze top scored with 29-points, ably assisted by local sisters Ciara and Niamh Tolan, who contributed a further 28-points between them.

SETU Carlow tried to break home hearts with a rousing final quarter, but Dave Baker’s team held on to clinch the win. Something he was pleased of:

“Absolutely delighted to get the win in a scrappy game. The girls came together in their first national league game and beaten an excellent SETU Carlow team. We had a huge turnout in the gym and all in all it’s a very positive start for us.”

Limerick Celtics were the final team on opening weekend to pick up a win. They had to come from a 17-point deficit to defeat Phoenix Rockets 88-78 on home soil. Adriana Acosta put in an impeccable shooting performance to lead the scoring chart on 24-points. Amazingly the home side didn’t get their noses in front until the 4th quarter, with only five lead changes taking place in total. Four players for Phoenix Rockets hit double figures, Clark Calisha, Georgie McGrath, Rebecca Barker and Charley McGrath. They’ll be able to take some positives out of the reversal.

Limerick Celtics head coach Tony Hehir was suitably elated afterwards: “The girls showed great character and determination and I’m absolutely delighted for the girls to get their first win of the season in what was an amazing atmosphere in Crescent Comp this afternoon.”