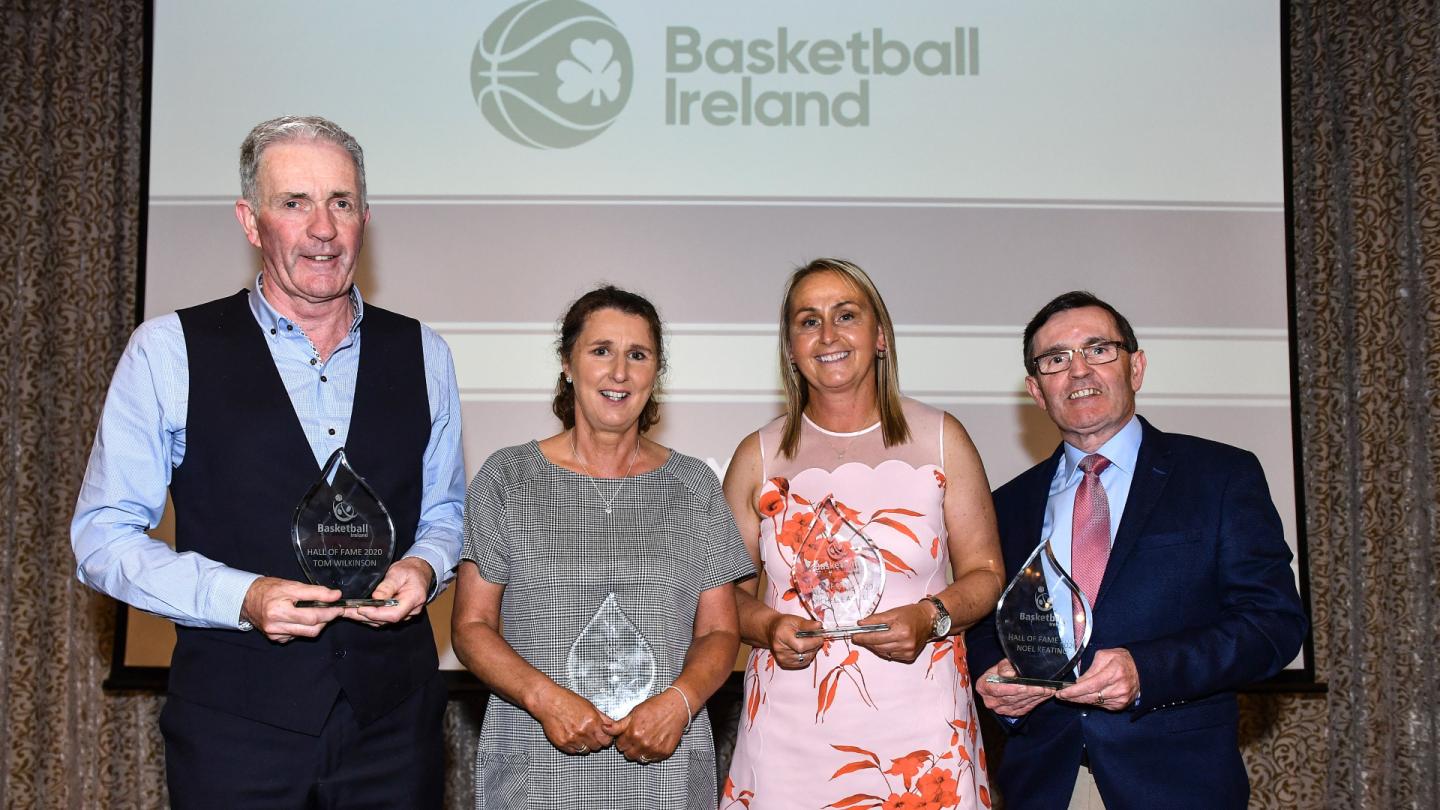 Tom Wilkinson, Michelle Aspell, Caroline Forde and Noel Keating have been inducted into the Basketball Ireland Hall of Fame. It took place at the 2021/22 Annual Awards and Hall of Fame ceremony at the Royal Marine Hotel in Dun Laoghaire on Saturday.

“It’s a great honour and privilege to be inducted into Basketball Ireland Hall of Fame and join an elite group of previous inductees, along with my fellow nominees this year. I dedicate this to my wife Kay and family who encouraged me to play as long as I did. I’d like to thank all my former coaches and teammates who helped me achieve many successes in the sport. Special thanks to Denis Wallace and Neptune BC, who nominated me for this award, as well as Kieran Shannon and the rest of the Hall of Fame committee.” - Tom Wilkinson

Michelle Aspell is a three-time Women’s Super League player of Year (2004, 2005 and 2008), and her playing career saw her claim six Super League titles and five National Cup’s while representing Waterford Wildcats and UL. Internationally she was a key player for Ireland, including a game high 18 points in a FIBA Women’s EuroBasket qualifier win over Holland in 2009. Off the court she’s helped set up Limerick Celtics alongside Tony Hehir.

Speaking of her induction to the Hall of Fame, Aspell said: “To be inducted into the Basketball Hall of Fame is such an honour. I am grateful to be recognised as a contributor to the sport that has given me so much. I am also grateful to my family and all the friends I have made along the way who have supported, helped and shared my basketball journey with me and without those people I wouldn't be where I am today in the sport that I love.

Caroline Forde, who represented Ireland over 100 times, was a multiple Super League and and National Cup winner with Blarney, Lee Strand Tralee and Waterford Wildcats, including MVP performances in the 1987 and 1993 National Cup finals while for Blarney and Tralee respectively.

“Delighted and honoured, and at the same time humbled as well to be recognised by the basketball community for my achievements on the basketball court, and to be inducted into the Basketball Ireland Hall of Fame, with fellow player inductees Michelle Aspell, who was a teammate of mine in Waterford, and fellow Corkonian Tom Wilkinson. Great to be joining distinguished players such as Siobhan Caffrey, and Susan Moran in receiving this award. It’s a real honour and privilege for me to receive this award and to also happily remember my two beautiful sisters Miriam and Annette Forde gone too soon, who played with me for a large amount of my career, and my parents Mary and Joe who encouraged us all. I really enjoyed my time playing with and against loads of fantastic players, both with Ireland and club. More so at club level, playing with Sandie Fitzgibbon, Rose Breen, my two sisters Miriam and Annette, Bernie Kenny, Deirdre Leen, and Marla Maupin. I would also like to mention my time playing in Tralee and Waterford, all my team mates too many to mention, but great times and memories on and off the court. Apologies if I missed out on anyone, but suffice to say I really appreciate and enjoyed my time playing with lots of great people. I was also blessed to be introduced to the game and trained by my first coach Bernie Murphy, and my wonderful mentor Ann Murphy, who both had a huge impact on me as a player and as a person. They are truly lifelong friends. I’m so grateful to have had the legendary Dommie Mullins, who coached me and my sisters for many years in Blarney. He was always there for me when times were tough, and still is to this day. Jimmy Diggins, Gerry Fitzpatrick, my husband Aidan O’Shea, Vicky Vaughan, and the great Liam Hartigan also had a strong impact and influence on my game. I have made some great friends on and off the court like Mary Edwards from Tralee and John Hayes from Waterford. I have some fantastic memories, which I will cherish most of all from my time involved in the sport, and on a personal level it’s great to see my daughter Simone carrying on the same love and passion for the game I had today.” - Caroline Forde

Noel Keating is honoured for the vital administrative part he’s played in the sport, which included serving as Basketball Ireland CEO from 1983-1996. He played a vital role in the bringing the National Basketball Arena to fruition. He was also pivotal in identifying the appeal of a knock-out competition, securing it sponsorship and live television, which led to the National Cup, which began in 1983/84.

“I am honoured and delighted to be inducted in the Basketball Ireland Hall of Fame.  I am particularly mindful at this time of the support I received from my family, the dedication of so many teachers, volunteers in various local and national roles and hard-working staff colleagues. Wonderful memories.” - Noel Keating 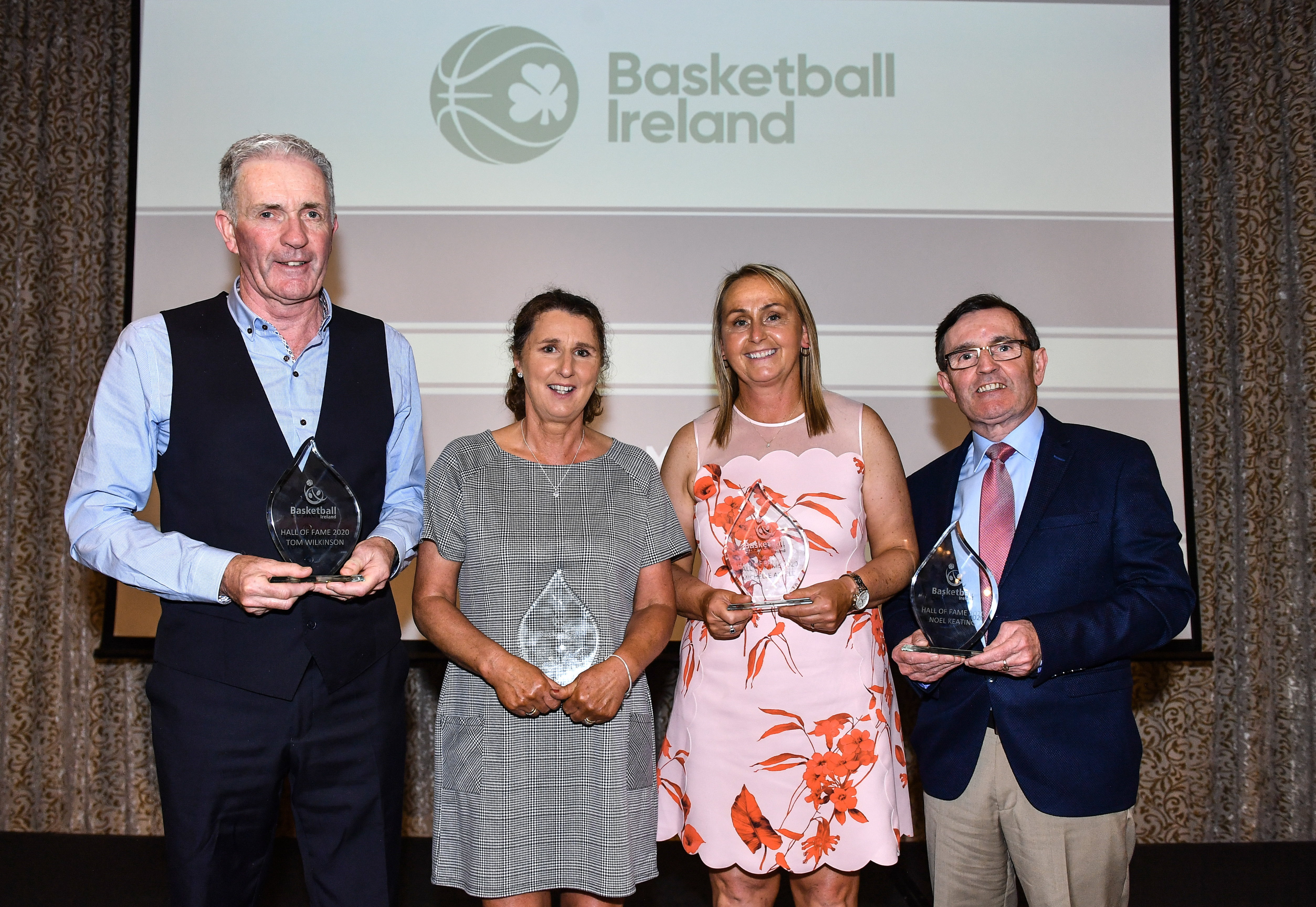 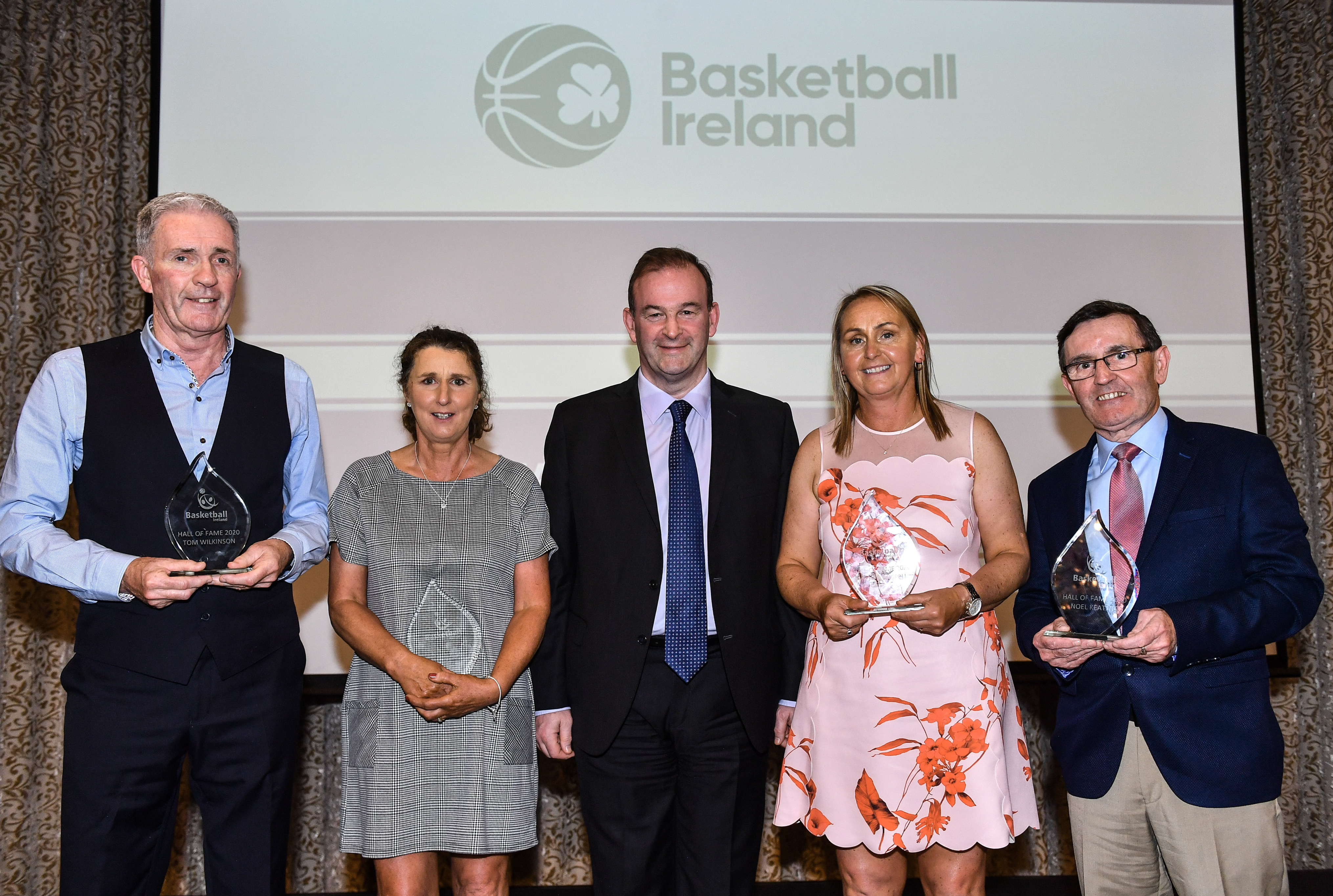 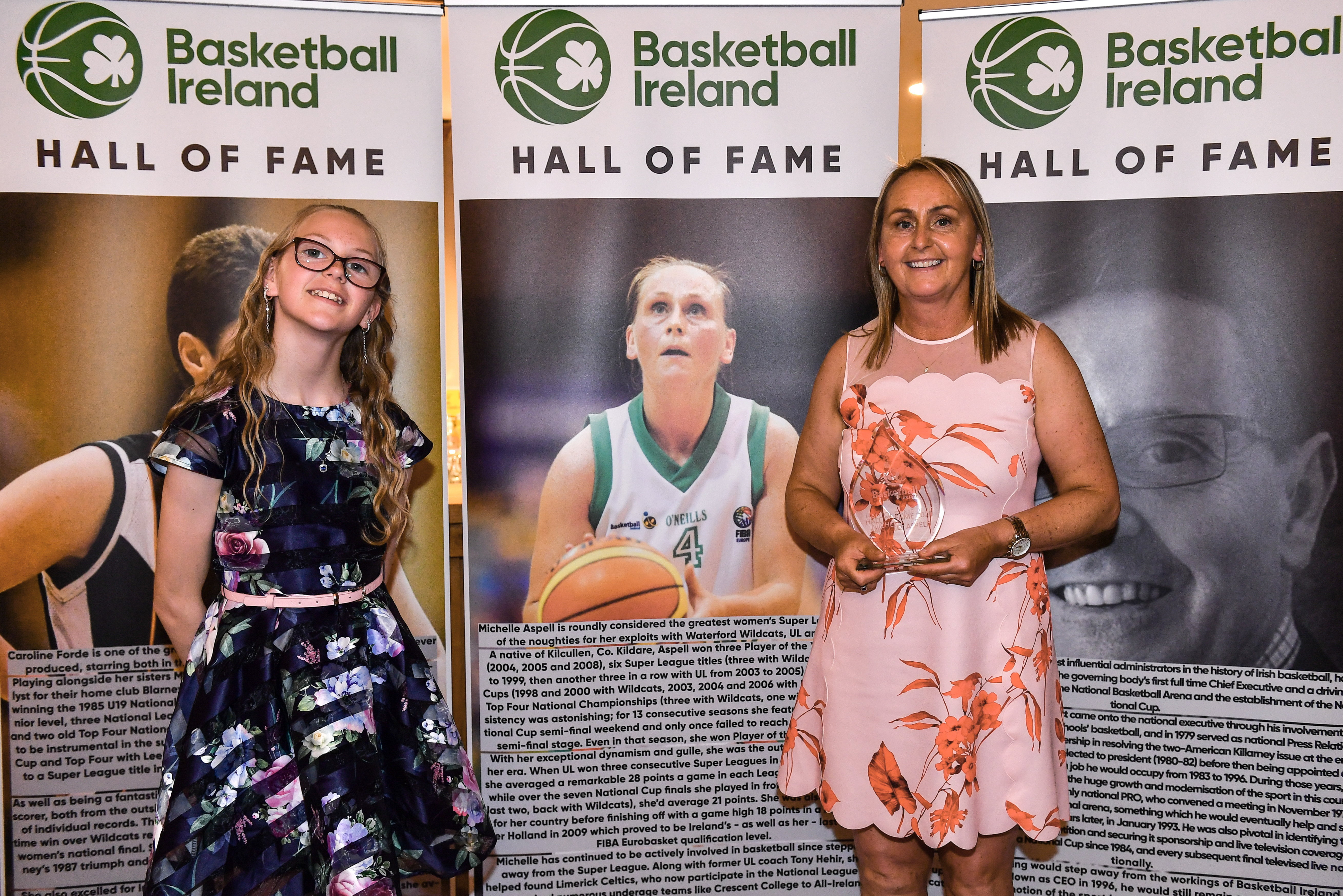